If you glance at Google Tends comparing Drupal content management system (CMS) to Wix, you might think that Wix is the cause of Drupal’s downfall. I’m not so sure this is true.

What does appear to be true, if Google Tends is an accurate indicator of demand is that both Drupal and Wix have been around for over a decade.  Both started at around the same level.  Demand for Drupal grew quickly until it peaked in 2009, apparently its zenith, when Whitehouse.gov converted to Drupal during the Obama administration.  Then, around February 2011 Drupal started its downward trend and is currently hovering at its popularity circa December 2006.

Meanwhile, Wix took a while to get traction.  It’s growth was much slower and steadier than Drupal.  About the time Drupal started its decent, Wix started to accelerate in its growth and popularity.  By January 2014, about 10 years after Drupal was founded and 8 years after Wix was founded, demand for Wix matched and overcame that of Drupal.  In the three years since that moment, Drupal has continued to slow down while Wix has continued to grow.

So, if you look at how their paths crossed, you might think that Wix displaced Drupal. And, in fact, if all you want or need is a simple website that you can stand up in minutes with limited functionality and fresh designs then Wix makes a heck of a lot of sense (and cents). Wix costs almost nothing compared to Drupal if you are a non-programmer. If you know how to code, then the only cost is your time, which should be valuable to you. But, if you have serious needs, require serious functionality, and operate a more complex organization then Wix is probably going to leave you underwhelmed.

What I find interesting is that over the past year to 18 months, Wix has had a turbulent flight. Interestingly, Drupal’s descent has started to flatten out.  In fact, with the popularity of Drupal 8 and the need to convert D6 and D7 websites into D8, it seems that Drupal might be due for a renaissance.

In my personal experience, when it comes to government agencies – federal government, state, counties, and cities – as well as nonprofit organizations and member associations, Drupal seems to be the tool of choice.  Rarely do I see an official government or nonprofit website powered by Wix.  More likely, they are powered by Drupal or WordPress.

So, lets wait and see what the future holds for Drupal and Wix.  As an agile web developer focused on serving primarily government agencies and nonprofit organizations in the Washington DC metro area, I’m putting my money on Drupal. 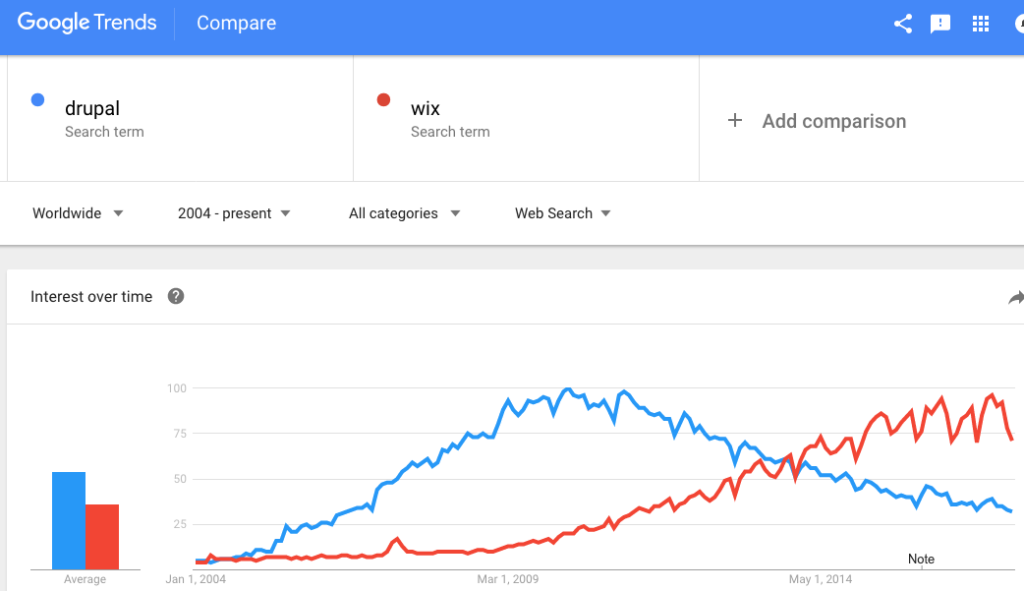 Do you need some help?

Let's get started. Tell us a little about yourself and your organization
and we can start a conversation about your needs and our capabilities.
Tagged: drupal vs wordpress
Share on Facebook Share on Twitter

Moving from Drupal 7 to 9 is Now the Best Option

The Hidden Costs of a Move to Drupal 9

The Agile Podcast Episode 8: Improving Your Site Through a Migration

The Agile Podcast Episode 7: Estimating Time and Money for a Drupal 7 Migration