Some time ago I published an article about git best practices in agile projects, which prevent the most common conflicts when many developers are collaborating together in a project, especially when they work remotely.

That workflow is enhanced by a feature offered by systems like GitHub and BitBucket called pull requests, which allows developers to follow a process that helps them avoid code conflicts, and also pair review the code that others are pushing into the project.

This is how a pull request looks like. In the example, a hotfix branch is being merged to master. The pull request holds the merge in a state that allows other developers to see what is being changed. If a developer agrees with the changes, she can proceed with accepting the pull request and executing the corresponding merge and then delete the supporting branch if needed. 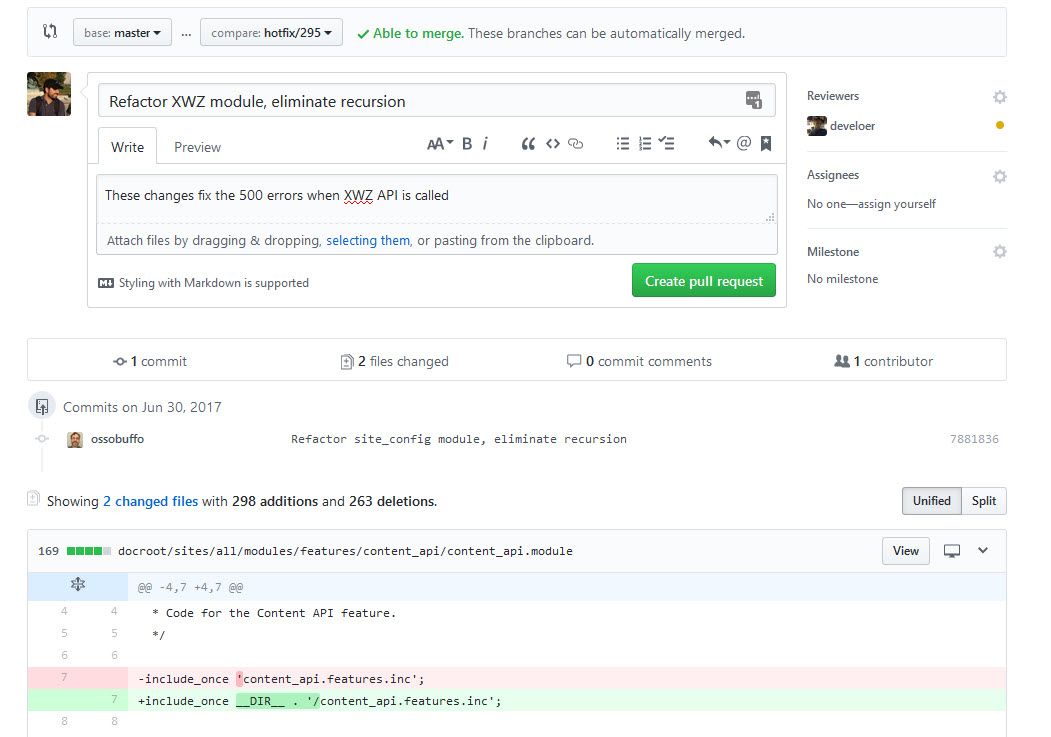 The difference between using pull requests and following the standard git workflow is that with pull requests developers – especially the ones who are making the changes –  are more conscious of what is being changed, because the user interface highlights the code that is being deleted, added and modified, and it also shows the files that are being affected with he changes.

Another great feature of pull requests is that it allows developers to have conversations about the changes, and even add annotations in specific lines of code. Those comments make the merging process more transparent and visible to the entire team, and it also helps with documentation.

Adapting the standard git workflow to pull requests is easy. This is the revised workflow:

The main branches are the same. The origin server (or central repository like Github or Bitbucket) holds two main branches with an infinite lifetime:

IMPORTANT: Master and develop should never be modified directly.

The supporting branches are the same as well. These are created temporarily in the system to make changes and collaborate without affecting the master and develop branches directly.

The revisions of the workflow are noted in the merging process. These are the conventions to create and merge branches in the system:

Once you have merged your changes in any of those cases, ensure you pull those from origin to get them in your local environment.


Do you need some help?

Let's get started. Tell us a little about yourself and your organization
and we can start a conversation about your needs and our capabilities.
Tagged: Bitbucket, git, github, Pull request
Share on Facebook Share on Twitter

What is ITIL and What Does It Have To Do With Agile?

Driesnote 2022 and the Future of Drupal

What Makes a Workplace Agile?